My name is Gus Garcia, and I am legally blind. I am legally blind, not blind as a bat, although I’ll be the first to acknowledge my visual limitations. Although life is hard as a legally blind individual, it would be a lot harder if I were completely blind. I recognize people based on body shape and voice tone. Most faces look like a partially scrambled television channel. Sometimes, when the light is just right and I stare hard enough, I experience clarity. It only lasts for a moment or two, but it’s pure euphoria. To my blind eyes, life is all about the small things!

As for how I ended up legally blind, I guess you could say I was really unlucky. Two incidents in an 18-month span changed my life.

Incident No. 1 occurred roughly 12 years ago. I was attempting to fix a car battery when it exploded, and the chemicals splashed into my right eye. My eyesight gradually dissipated, and by the time I saw a doctor four months later, it was too late to fix what doctors diagnosed as a detached retina. They re-attached the retina, but I have no vision in that eye.

Incident No. 2 took place when I was 14. I was walking home when a pack of six guys jumped me. They beat me up pretty good, busting my left eye to the point where the retina detached. At this point, my eye condition was very delicate, and some major lifestyle changes needed to be made. But I was a stubborn kid, ignored doctors’ orders and continued to play soccer and other sports. My retina detached again, and three surgeries later, there I was, a legally blind teenager seeking answers and hope.

My school began sending me places to meet other kids with vision impairment. I soon became a member of the Blind Center of Nevada, a nonprofit that offers all sorts of programs for people in my shoes: braille and mobility training, arts and music programs, fitness classes, employment opportunities and access to counseling. I began training my mind and body for the lifelong journey that lay ahead.

Due to all of the great resources mentioned above, I understood things were not impossible; I just needed to learn to do them differently. I started with life’s essentials AKA learning how to use the voiceover function on my cell phone in order to review my messages, answer and make calls, and check my email. The things I used to take for granted – going for a walk, using the computer and waking up in the middle of the night to use the bathroom – all had to be relearned.

The computer took some getting used to. I have to blow up the icons to five or six times their normal size, and even then, the text often looks like a jumbled mess. But like anything, you learn to adapt and adjust. My biggest challenge is mobility, going to an unfamiliar place and using a cane to navigate a vast space. For example, the UNLV campus – where I am currently a communications student – is like a maze to me, but I always find my way around.

The struggles gave way to an intense creative desire. I started playing music – guitar, bass and piano – and discovered a natural talent. Then, through some sort of karmic intervention, the Blind Center of Nevada created Broken Spectacles a few years ago. Broken Spectacles is Nevada’s only all-blind rock band, and we are pretty darn good. We’ve had many band members throughout the years, but are currently a funky six-piece outlet, with a pair of keyboardists and a rapper/percussionist supporting a guitarist (myself), a bassist and a drummer.

We have played at the Hard Rock, The Smith Center and House of Blues, and brought the house down at the Blind Center’s annual gala. We cover everything from the Beatles to new-school rap and work tirelessly to perfect our craft. A lot of people say it’s fun – and it is – but we work hard. It’s like anything in life: If you want to achieve greatness, it won’t be fun all the time. There’s a lot of blood, sweat and tears that go into forging a brave new path like Broken Spectacles. And in addition to fronting Broken Spectacles, I give music lessons to Blind Center members looking to scratch their creative itches.

I can talk for days about the strides I have made as a legally blind man. I can tell you about the music I’ve created, the students I’ve tutored and the fact I am on track to graduate from UNLV next year. And while I’m proud of all those things, I’m most proud of the bonds I’ve formed with men and women struggling with visual impairment who I interact with on a daily basis at the Blind Center of Nevada.

At the Blind Center of Nevada, we’re like a family. We laugh until it hurts and bicker like siblings. Emotionally and psychologically, the Blind Center has given me the strength to believe that my disability won’t hold me back. It’s given me the opportunity to grow and excel at the things I enjoy. The Blind Center is like a fortress to me, which offers solace to the tired and wounded soldier. Because of this wonderful place, I have regained the ability to believe in myself. I hope to continue mentoring people who were like myself, lost and seeking hope. Countless people helped me along the way, encouraging me when I wanted to give up and live my life in the literal and figurative darkness.

One of those people is Aarius White, who taught me the lesson of humility and humor. One day, about 18 months ago, Aarius and I were supposed to meet at a mall on the west side of town. He’s running a few minutes late when he calls to tell me that he’s on the wrong bus. It turned out he was over by Nellis Air Force Base, an hour or so and a couple of transfers in the wrong direction.

The fact that he was willing to get on the public bus and find his way was inspiring. Rather than panic, he chuckled. Every time my blindness is an inconvenience, I think of that day and a man who, instead of sulking, found a solution. When I talk to people who are newly blind, I tell them about Aarius White’s misadventure on the bus and the power of positivity.

Ultimately, my goal is to pay it forward and let people know that visual impairment is a hurdle that can be overcome. It’s my turn to lead the blind community by example, whether it’s through my music or mentorship. A little inspiration can go a long way. I am Gus Garcia. And I am living proof of that. 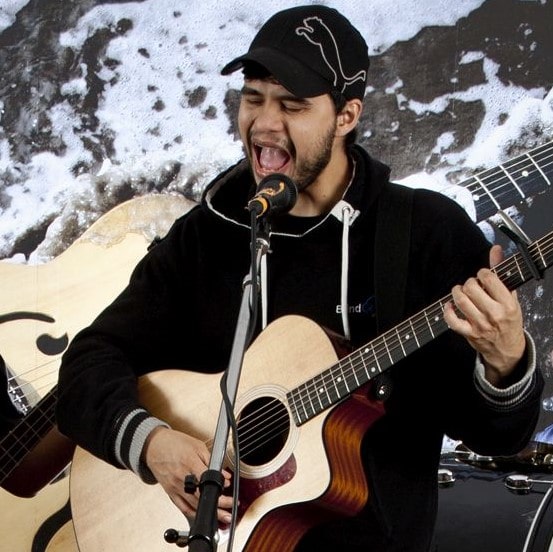